I’ve always wanted to loop Sydney Harbour by bike but my aversion to roads made me leave the challenge to others. Having an eBike makes it easy as I can opt for slow side-streets and footpaths where the cycleways run out.

My arbitrary starting point was near the Ensemble Theatre, Kirribili, not far from the northern end of the Harbour Bridge. I passed Admiralty House and weaved through quiet streets finding different perspectives on familiar landmarks. 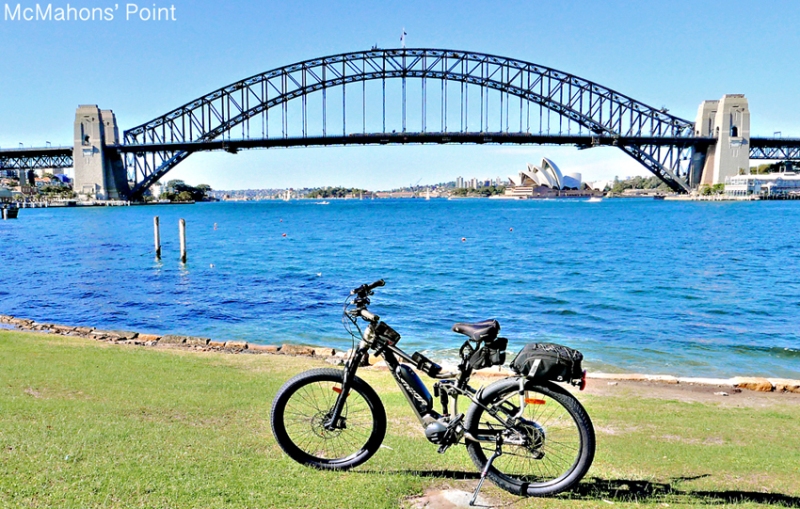 It was a quiet Sunday morning and easy to make my way down to McMahons Point for a compulsory photo of the iconic ‘clothes hanger’ that sits across Sydney Harbour.

This is a very hilly part of Sydney so be prepared to use low gears and high electro-assist to get around. I navigated simply by keeping the harbour on my left and went up several dead-ends trying to stay close to water. Its’ all part of the fun of exploring on an eBike.

The journey from Berry Island to the Figtree Bridge in Lane Cove requires riding on suburban footpaths alongside busy roads. For this reason I would not come this way again. But once you get to the bridges, its great sightseeing. Look over the Figtree Bridge for the historic home of Australian pioneer, Mary Reiby’s Cottage.

You have probably driven over the Tarban Bridge many times without noticing either its classic architecture or sweeping views.

It’s a challenge getting a full perspective on the magnificent structure of the Gladesville Bridge, so head down under it via the side path.

The boxy cages of the Iron Cove bridge are so old-world. I’ts worth taking some time at the Birkenhead Point retail centre, even if only for a coffee. If you have the time and energy, you can do a quick lap around the 6 km Bay Run on the other side of the Iron Cove Bridge.

You can either follow a designated bike lane through some back-streets of Balmain or take a slow cruise through the shopping zone along Victoria Road until you reach the next bridge. It is one of the most aesthetically impressive bridges anywhere: the Anzac Bridge. The amazing mural on the wall of the old storage silos must be the biggest public art display in the country.

Once you are over the Anzac Bridge you are on the home run. Pyrmont is an interesting area with fabulous views wherever you look; its also only a few hundred metres from Sydney Electric Bikes in case you need a service or want to drool over its ebike range. 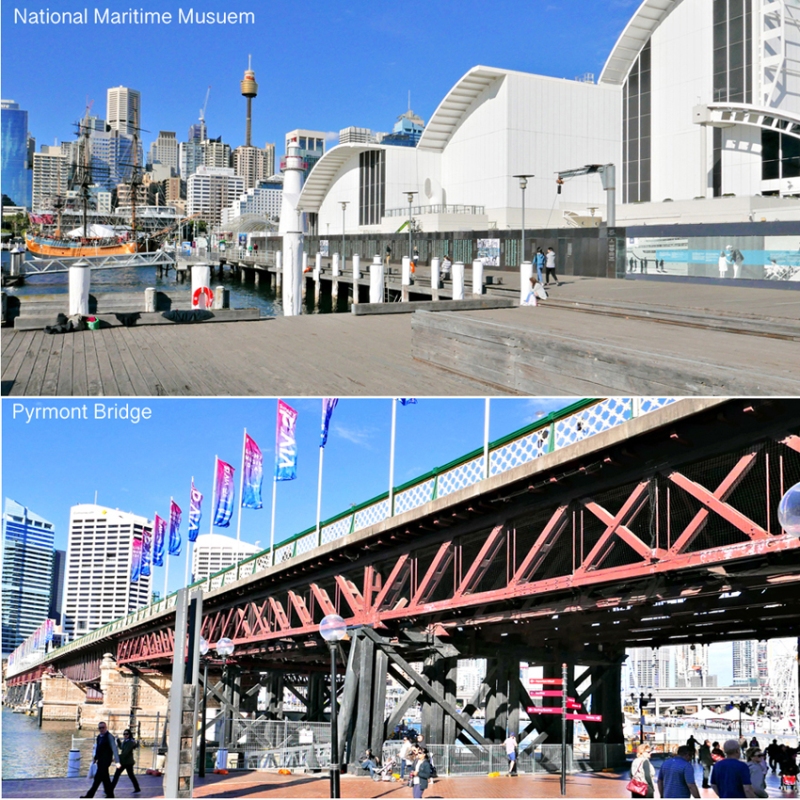 Head past the National Maritime Museum and go over the always colourful Pyrmont Bridge for some great views of Darling Harbour.

Once you are off the Pyrmont Bridge you can look back for some interesting angles on Darling Harbour over the top of the Sea Life Aquarium. Proceed north through The Rocks for a quick look at the Opera House, then head up via The Observatory to the caged cycleway that takes you across the Sydney Harbour Bridge. When you can see Luna Park and the North Sydney Swimming Pool you know the tour is about to end.

Although I thoroughly enjoyed this 36 km ride and avoided being on roads the entire tour, I would not recommend it to other road-averse cyclists. The City to Gladesville southern half is wonderful: it’s safe, scenic, and full of interest. The Waverton/Lane Cove northern half is noisy and the good views are blocked by buildings. Instead of looping the harbour, I recommend riding half of it and then back-track. Everything looks different going back and it’s all good.