Kurnell is a popular turn-around point for cyclists and each time I’m there I promise to do more exploring next time. So that’s what this ride is about: exploring the Kurnell Peninsula. I off-loaded the ebike in the public carpark at the airport-end of Botany Bay where you see planes come and go. 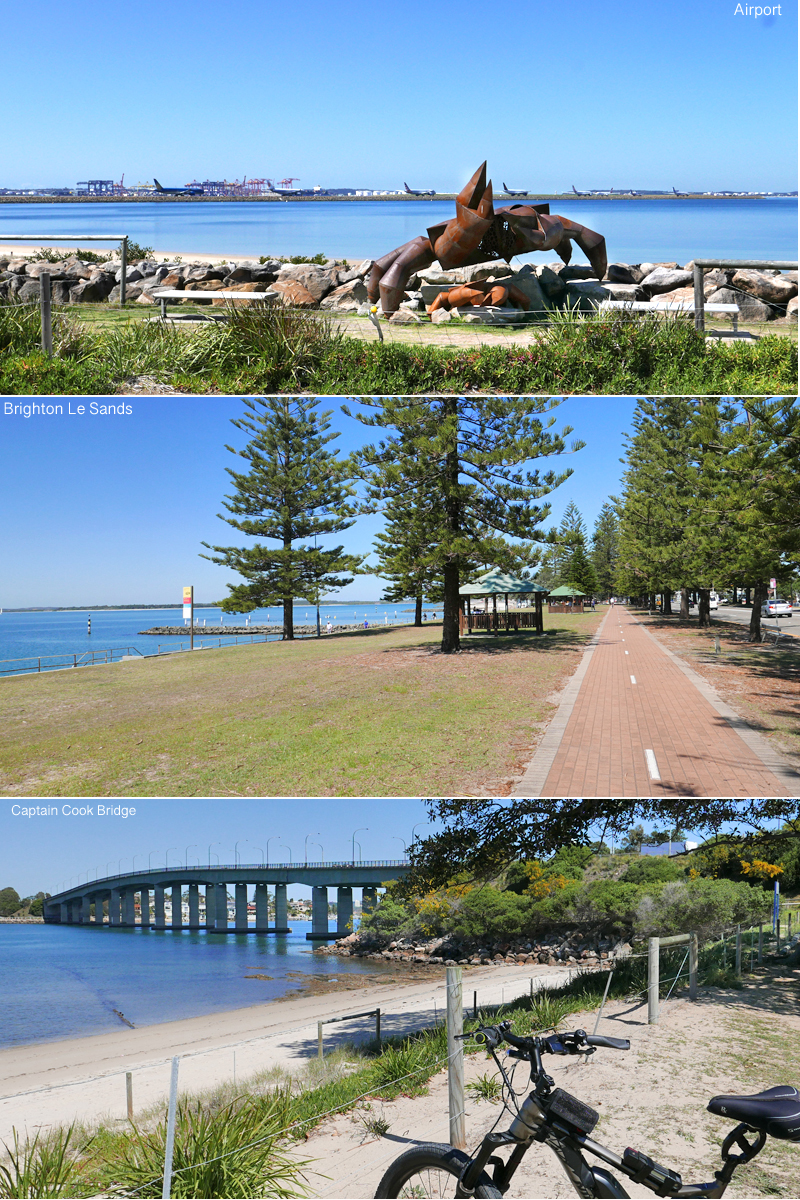 At the other end of the bay, cross the Captain Cook Bridge and ride the new Taren Point cycleway until you join the Captain Cook Drive. You’ll be on the road for a few kilometres but the bike lane is wide and clearly marked which satisfies my safety rules. 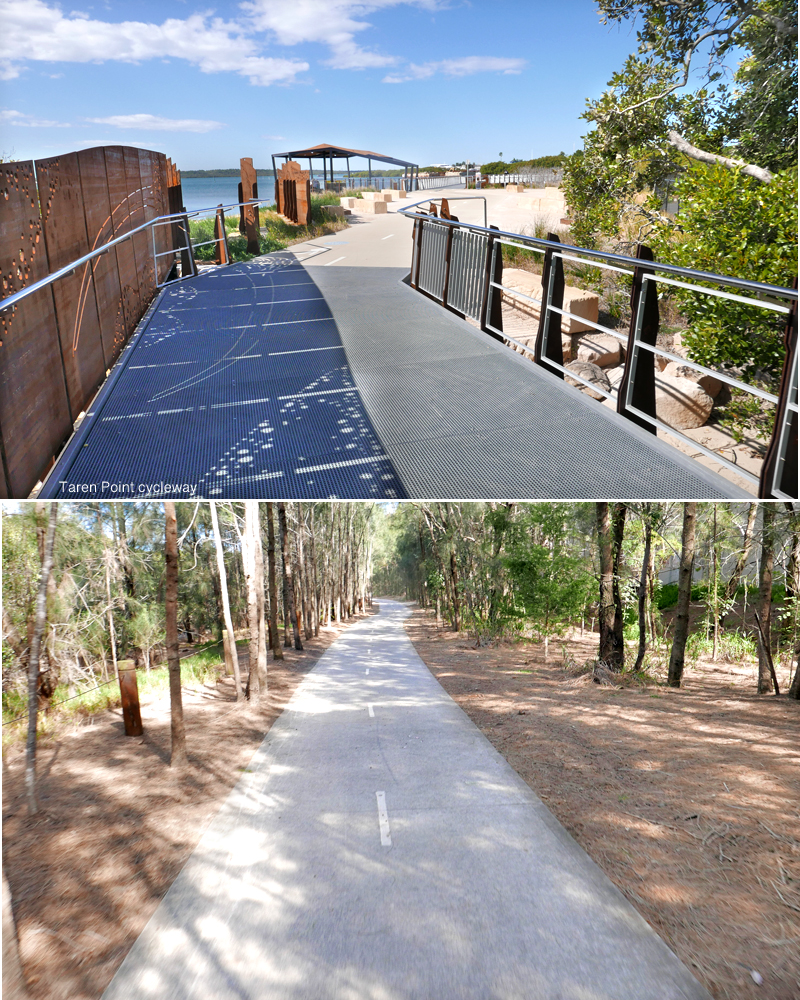 As this is an exploring ride, keep an eye open for tracks leading from Captain Cook Drive into the bushland. The first one appears on the left and goes for only a few hundred metres but it takes you to the charming Woolooware Lagoon. Back on the Drive, as you head towards Kurnell, you’ll find an entry to old Towra Point Road which takes you into the Towra Reserve Wetlands. It feels like an isolated country track yet it’s close to urban areas. The next track you’ll find takes you into the Kurnell Boarding Stables and Rding School. 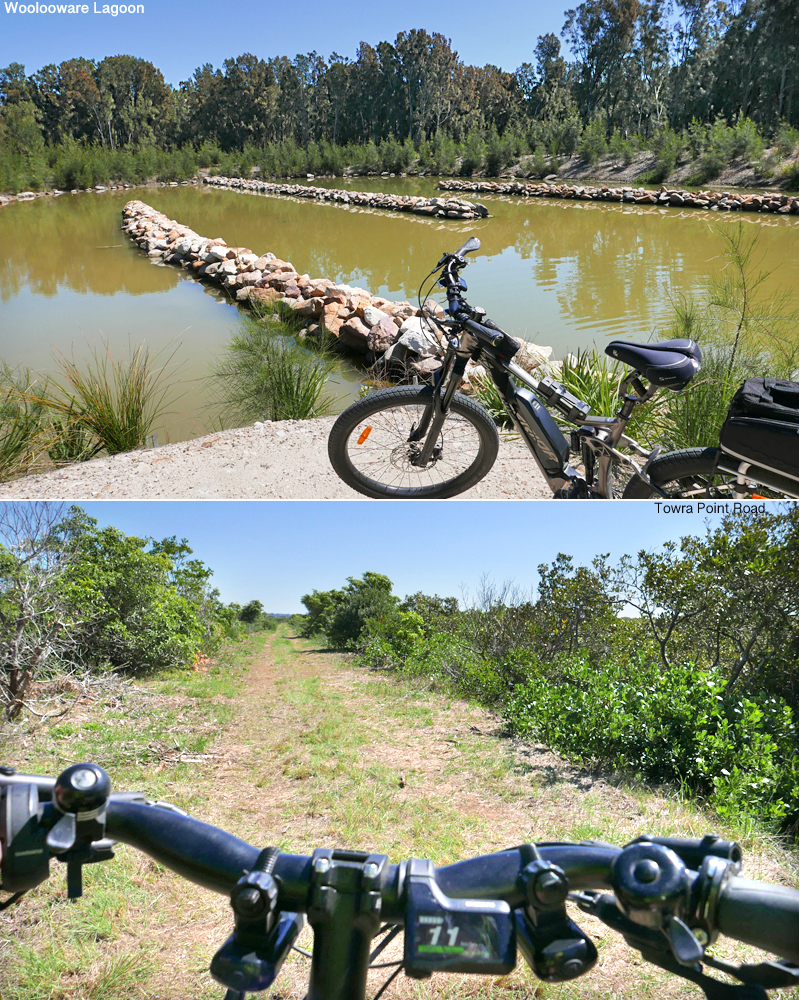 It was already an interesting ride but it got “curiouser and curiouser” (as Alice said). On the right side of the Captain Cook Drive just before the Sydney Desalination Plant is an unmarked but well-graded gravel road that leads to Boat Harbour. There you find the Kurnell Sand Mining company and a huge lake hidden by the sand dunes. Especially curious is a colony of about 30 ramshackle dwellings that looked like a dystopian set for a Mad Max movie. A ranger said they were occupied by mine workers and weekenders, but nobody was in sight. 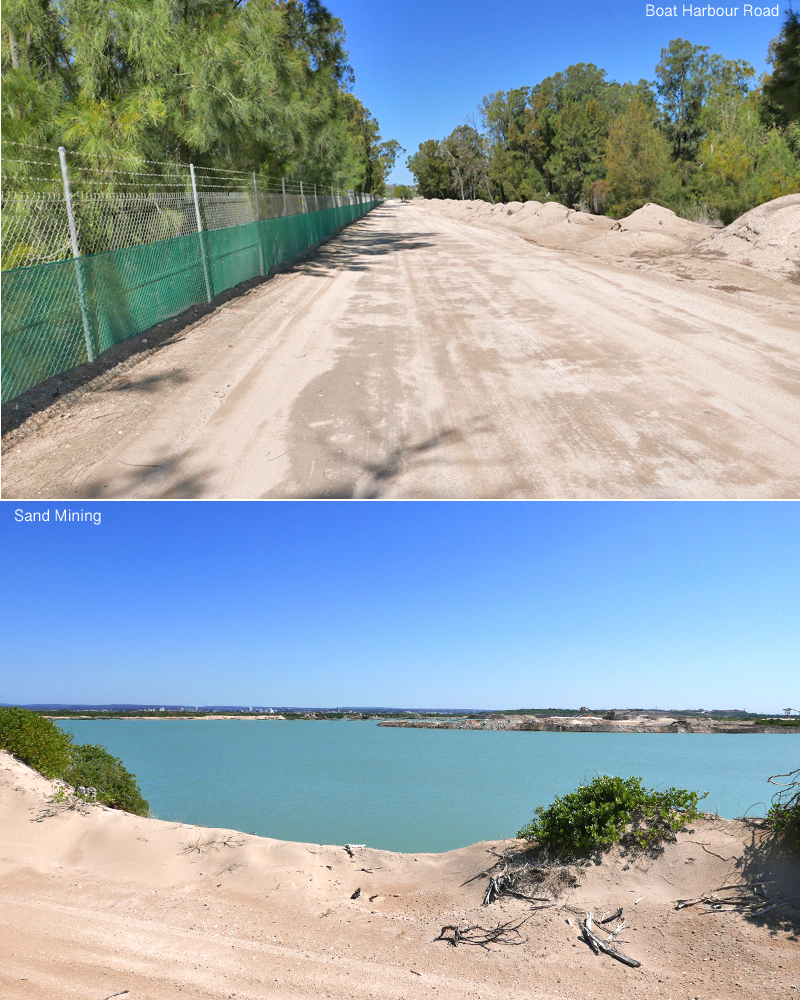 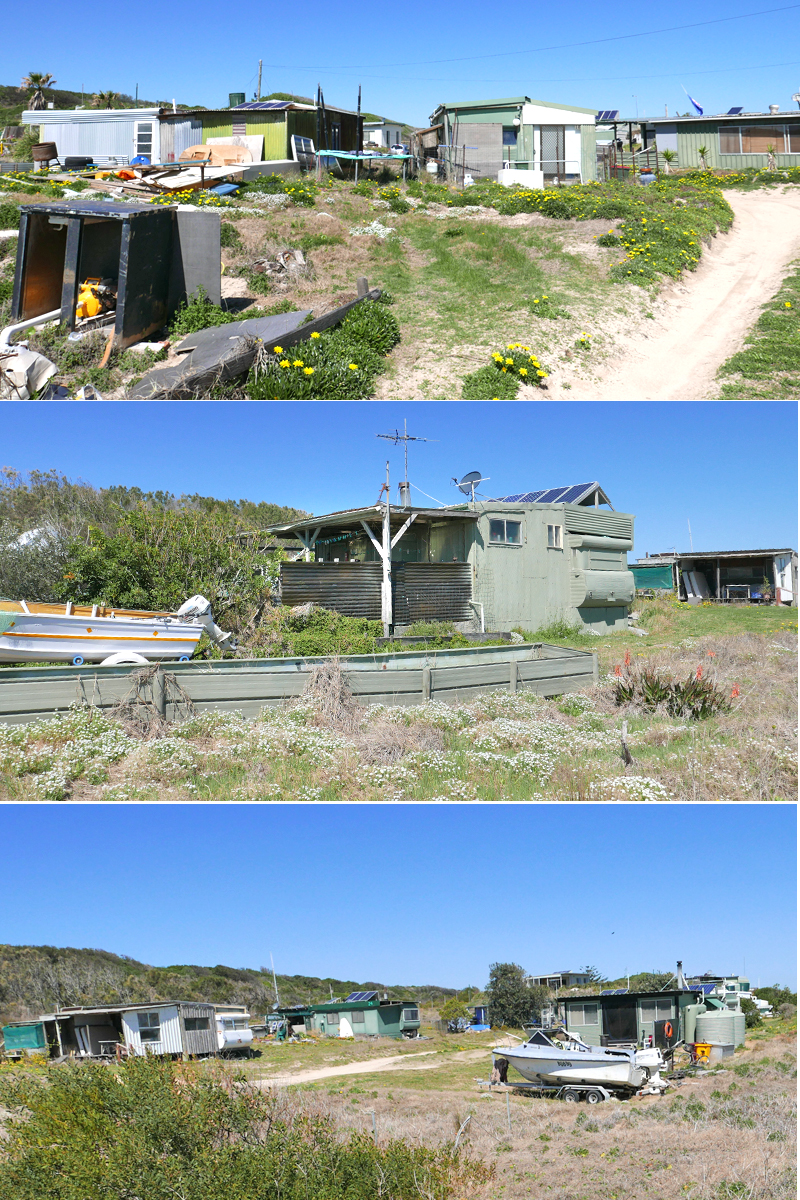 The dirt road goes down to the northern end of the Cronulla sand dunes and the little gem of Boat Harbour.

When you are back on Captain Cook Drive you have almost reached the suburb of Kurnell. Taking the first left turn means you can enter via a grass track behind houses leading to the Botany Bay National Park. You will pass a ship docking wharf, two cafes (in case it’s time for a break) and Captain Cook’s Landing monument. 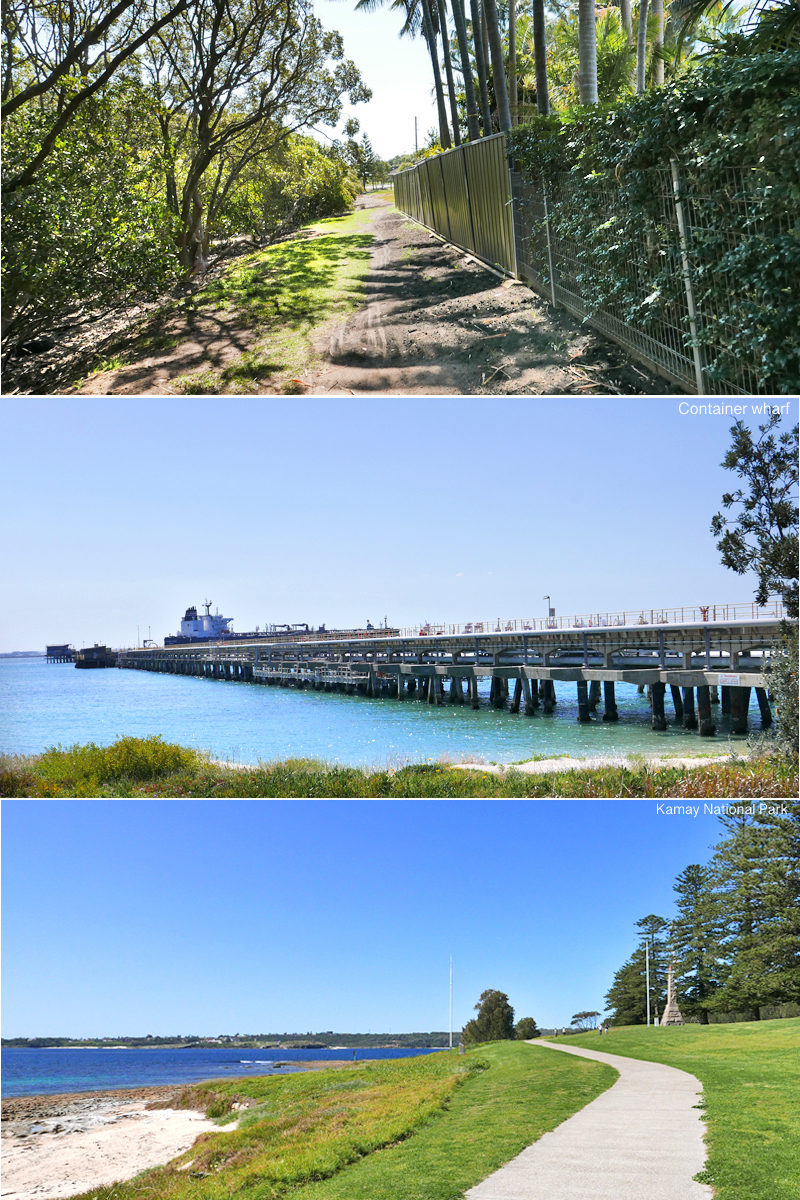 During the week the National Park road is very quiet; I took the bike lane up to Cape Solander stopping briefly at Yeno Gap. The views off Solander Headland are simply glorious.

At 64kms and three and a half hours, this might be longer than some riders prefer. You can clip 10km off by starting at the Captain Cook Bridge or 20kms off by starting at Cronulla (where you can arrive by train). For me, it was a great ride and I now have a better appreciation of the Kurnell Peninsula. 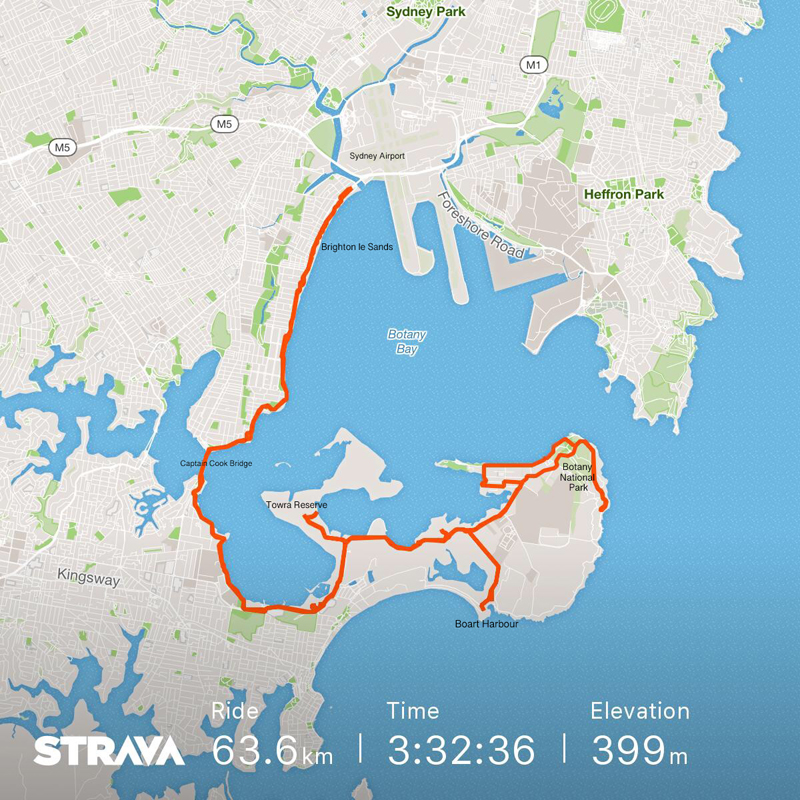